“A billing service is a must for me. When I looked around for other options there were a few that said they had a billing service they could refer. Genesis Chiropractic Software and Billing was light years ahead in this category.” Genesis’ Billing Service, Billing Precision, has processed hundreds of thousands of insurance claims for chiropractors through the billing engine powered by Vericle technology. As claims are sent through the central database and their payment, underpayment, or nonpayment is analyzed. When a claim fails the system routes the claim to a biller for follow up rather than having billers look for claims in AR reports. Rules (over 2 million currently) are built into the technology to “flag claims” up front if a claim looks like it will not get paid or needs attention. In an environment where insurance companies are constantly changing their rules Genesis provides the infrastructure to leverage all of the claims data and optimize billing performance. This means that doctors using this system actually work as a team to beat the insurance companies at their own game just by using the system. All of the members submit our claims through this engine and it improves as we go. Whether it is 20 or 2000 doctors, this is a solution that can scale as more doctors join the network.

The massive undertaking of managing billing for hundreds of chiropractic offices forced Genesis/Billing Precision to create a dashboard that not only looks great but is functional. They use the same dashboard to manage their operations as practices us to manage their practice. The dashboard gives a high level visual representation of what is happening across key billing and patient relationship metrics. It is like a fighter jet cockpit. It highlights major threats to billing and patient relationship management. At first glance it can be overwhelming. That is why the Genesis Profitability Coaches are there. To help you asses the danger and right the course when needed. 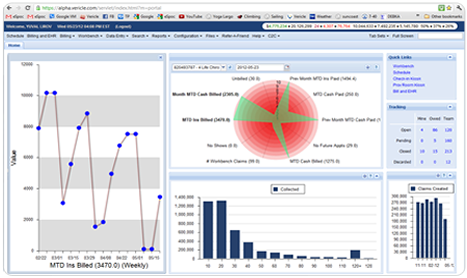 High level reporting is important as you fly but sometimes you have to stop and see what’s under the hood. Again, Genesis/Billing Precision uses the same reports you do to analyze billing performance. They have developed some unique reports that are not seen in other systems. One is called a MOS or Month Of Service report. This means you can see how much you billed month by month and, of what I billed how much is unpaid based on the moth it was billed in.

View a video demonstration of the CBP documentation features.